Making the most of life's journey alongside my three!!!

Amara and Terra being fairies

They incorporate their dress-up supplies into almost every game they play. Gloves become puppy paws, wigs signify certain characters, wings can be given to almost any animal, and the clothing has a range of uses.

When we began toy cycling  a few months ago I chose to keep their dress-up supplies accessible constantly. I didn’t want to take away something that encourages their creative play, their very active imaginations.

I don’t really add to the dress-up clothing very often. Some of their pieces were gifts (a few princess dresses, a couple pairs of wings, low-heeled princess shoes), I find some things at dollar stores (flimsy-fabric witch costumes, tiaras and wands, hats and gloves and sashes), and I make some things (knitted scarves, tutus, crocheted hats).

My favorite finds for the dress-up collection are the things I find on clearance, mainly at Walmart, the day after Halloween, and at Kohls (almost any day if you’re willing to wade patiently through their racks of clearance clothing and bring a coupon).

Since I seldom have the time and energy to get the most out of Kohls’ clearance sections I look forward to going to Walmart the day after Halloween. Retail therapy only works for me when I feel like I’m getting away with paying next-to-nothing; yesterday I had such a revitalizing, uplifting, and fulfilling time! 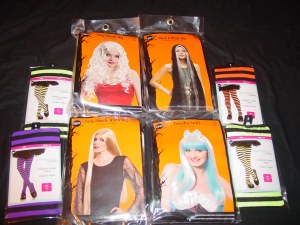 You can never have enough wings, $1.24 apiece 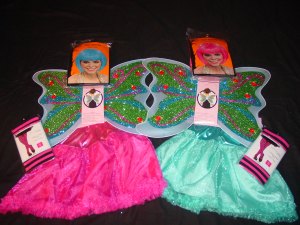 Christmas gifts! I figure their new tights, wigs and wings will be a bit worn out within two months. Plus, the adorable skirts were only $1.24 apiece!

P.S. A few weeks ago I stocked up at Old Navy’s Stuff and Save sale, and for my $60 purchase I was rewarded with $20 in Super Cash. To redeem Super Cash I had to come back between 11/1 and 11/7 and spend another $50. I typically don’t redeem my Super Cash coupons, but this time I really did need new maternity clothing and I had $25 in Rewards from previous purchases (points you get for using your Old Navy Visa card).

I purchased another pair of jeans and a jumper dress for Amara, a maternity tank and three maternity dresses for myself. I looked for a few things for Terra, but didn’t have any luck; she doesn’t need much of anything anyway, I just don’t like leaving her out of the I-got-new-clothes parade. Terra wasn’t jealous. She actually cheered for Amara when I told them about my purchase. Such a sweet girl! I love the new dresses; they are so comfortable (and best of all, I got them so cheap)!

P.P.S. If you didn’t know, NEVER shop online for Old Navy clothing. I love online shopping, but I save that for Coldwater Creek and Urban Outfitters and other things. Old Navy’s in-store clothing is always significantly cheaper than the same exact articles online. Also, going to craft stores (Michael’s has the best clearance sections) directly after a holiday has saved me a bundle!

Despite so many obstacles, things turned out alright.

My cow costume turned out alright after only one hour of sewing and a few finger burns from my hot glue gun. Amara helped me cut out my spots and Terra chose where they’d go. 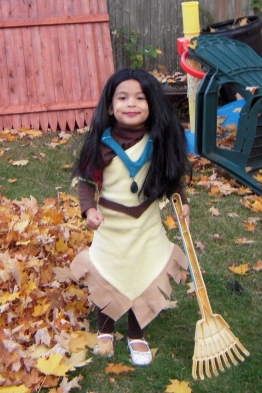 Terra loved being Pocahontas. She kept asking me to reapply her lipstick.

The girls did so well with Trick-or-Treat. They said “thank you” every single time 🙂

Amara with half of her stash

Terra with half of her stash

Halloween was a hard holiday for me to pull off on my own. I felt bad about not having their father’s pumpkin carving skills and not being able to take them to as many festivities as I wanted to due to being a single parent, pregnant, and insanely busy with graduate school. I don’t think they felt slighted though. They both loved their costumes and had a wonderful time celebrating. I suppose it’s not always about how much you get to do, it’s how much you get to enjoy what you’re doing, and we had a good time doing everything.

We attended the girl’s school Halloween party tonight. To my delight they looked alright. It was a good test run for the actual trick-or-treat; certain elements of their costumes need tweaking, but for approximately ten hours of work I am pleased with the results. 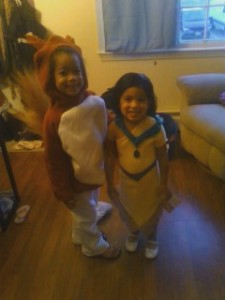 Amara was a red squirrel, Terra was Pocahontas

Since we were running late (as always) we weren’t able to make the pumpkin cookies we’d signed up to bring to the party. We love our pumpkin cookie recipe and make it every autumn. I will probably make them next week and bring them as a treat for the girls’ classmates anyway. The cookies are too good not to share (plus, no one ate our crackers and hummus offering tonight and I feel slightly guilty)! Here’s the recipe (we adapted it from a recipe we found years ago on Cooks.com):

In a large mixing bowl, combine the flour, oatmeal, baking soda, cinnamon, salt, walnuts, raisins, and shredded coconut. In a separate, smaller bowl, combine the oil, white sugar, brown sugar, egg, and vanilla . Whisk the contents of the smaller bowl thoroughly. Add the pumpkin to the smaller bowl in 1/2 cup increments, mixing thoroughly with each addition. Combine all the ingredients in the large mixing bowl and stir together with a spoon (it gets very thick, you may have to clear your spoon and start in different places of the bowl to ensure an even mixture). Drop small spoonfuls of dough onto greased baking sheets. Bake for 15-20 minutes at 350F (or until lightly browned).

Yields: A LOT! 4 dozen or so, depending on how big your spoonfuls of dough.

Substitution FYI: These cookies taste wonderful with butternut squash in place of pumpkin.

Long before I had children I vowed to make their Halloween costumes by hand, every year, until they begged me to buy them.

Despite my lack of sleep, lack of resources, and lack of time for making costumes this year, I am staying committed. This may have been a dumb idea, but it’s too late to turn back now!

I scrounged up the bulk of our materials from my impressive fabric collection in the basement. In fact, the only things I purchased were turtlenecks and leggings for the girls to keep warm, Terra’s pendant and wig, Amara’s tail supplies, and a few sheets of felt.

Our town does Trick-or-Treat on Saturday so I am doing everything I can to make our costumes by Wednesday night at the latest (I’m usually pinning and gluing five minutes before we start knocking on doors). I can do this…I MUST do this, my girls are counting on me! 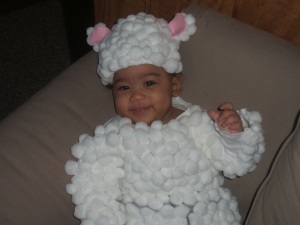 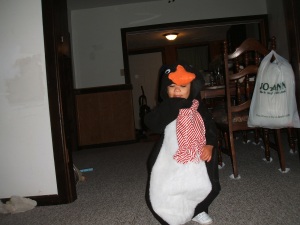 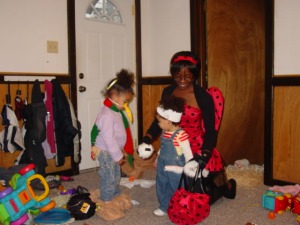 2010 – Amara – Spud the Scarecrow from Bob the Builder, Terra – Max from Max and Ruby, Jet – Ladybug 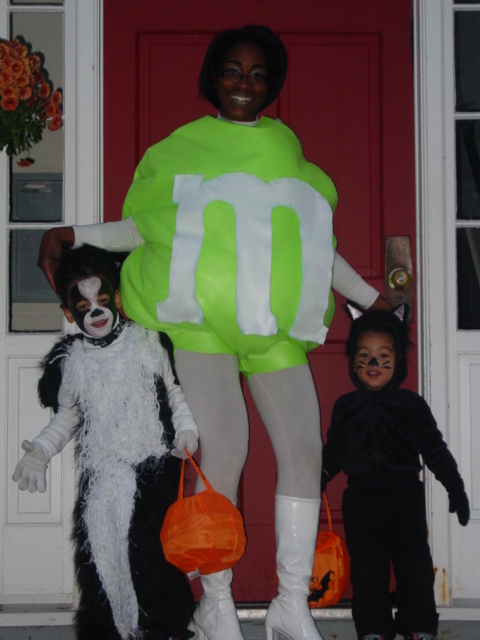 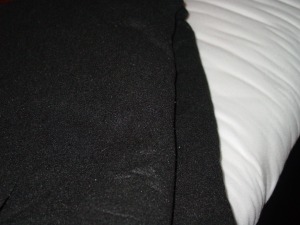 2012 – My first attempt at Terra’s costume…I forgot that she is three-dimensional though, so we’re starting over.

Please machine…please don’t fail me. Please make it through this week!